This week saw the release of Super Smash Bros for Wii U, the Wii U’s most anticipated game release to date. Whether you’re a Smash fan or not, whether you love Nintendo or hate their guts, whether you have the Wii U or never wanted one, whether you dig fighting games or prefer other genres, you most likely had your eye on this game and its 3DS counterpart for a while now.

The Smash Bros series is kind of like the “Nintendo Olympics”. Fighters from a plethora of franchises come together to compete in one massive fighting game. Therefore, when a new installment comes out once every console generation it is celebrated. And if you haven’t experienced any of the now (technically) 5 Smash Bros games, I’m not sure what your waiting for, nor do I see a better time to try the series out.

With this new iteration comes a lot of firsts for the series, one standing out most of all. Sure 8-player co-op was a pretty big new thing, but I find a lot of intrigue in the introduction of DLC. Of course I’m referring to Mewtwo’s announcement not too long ago. Mewtwo being the game’s first downloadable character has officially opened the door for other characters to join the fray in the future.

But who could be next? More so, who do you want to be next? Well I have 5 choices who I would personally want as future DLC.

I understand that it’s not confirmed that there will be any more DLC characters after Mewtwo, but that’s not stopping me from dreaming. No matter if Mewtwo is the only downloadable character or not, I will love this game reguardless. These are just characters I feel would make the experience even better for me personally.

Remember, as I always say, this is not my personal top 5 characters; not everyone’s top 5, and not the top 5 characters that will be DLC. My choices may vary from yours, so please feel free to disagree. Let me know in the comments who you would want as DLC.

Believe me when I say how disappointed and surprised I was when Lucas was cut in Wii U and 3DS. He was my main fighter in Brawl, and I personally felt he should’ve been in from the get-go. Especially considering the number of self-admitted clone characters that made their way into the game like Dr Mario, Dark Pit, and Lucina, Lucas seemed like a likely candidate. And even for a clone, he still had a good deal of differences from Ness.

I still think Lucas has a good shot at being in the new game. Like I said, he fits right in with the clones, he would continue to give Earthbound representation, and he has a good base to build upon. With some tweaking, you could probably even make him a bit more different than Ness. Maybe downplay his physical ability while buffing up his psychic ability. I dunno. At least his inclusion would make me happy. 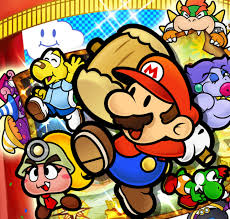 The idea of this character was being tossed about the Smash Bros community so much that I was surprised they opted not to include Paper Mario. I honestly expected him before Bowser Jr. It’s such a genius idea. Not only is he Mario, but he would play almost entirely different from Mario if done correctly. His paper quality also fits in when you place his flat self next to Game & Watch. I see nothing but potential with this character.

In my previous posts, I supported this character by saying that, as far as Mario clones go, Paper Mario would be the most preferred over Dr Mario. Apparently, Nintendo saw it the other way around. That’s why I’m not really holding my breath for Paper Mario to make it. At least in this iteration of Smash, people would probably draw the line at one clone per every character. Even I will admit that three versions of Mario would be hard to swallow. At that point you might as well throw Metal Mario in, too.

In my world Paper Mario could coexist with Dr Mario based on how different he would be from Mario already.

Yes, I know it’s not happening. I still want him in the game!

I really commend the choice of third party characters this time around. It’s clear that Nintendo went with the most iconic characters they could all representing a major part of Nintendo history in one way or the other. To pick another third party character would have to be on the same level of nostalgia as Pac-Man, Mega Man, and Sonic. I believe Crash is one of the closest to fitting the bill.

This is clearly a biased pick on my part since I have a huge soft spot for Crash Bandicoot games. But tell me he wouldn’t fit in the roster. standing next to Fox or Sonic he looks natural. As the former representative mascot for Sony in the 90’s, he has a similar relevance to Nintendo history as Sonic does. Besides, Crash was multiplatform for the majority of his career and has exckusive handheld games on the GameBoy and DS. Not to mention how much moveset potential he has.

I realize that Crash would be one of the last characters Nintendo would consider for Smash Bros, especially with rumors of a new Crash game coming to PS4. For me, an announcement of Crash in Smash Bros would do nothing short of make my head explode. Besides, Snake got in, so why not Crash?

He’s absolutely perfect for Super Smash Bros. Think of the possibilities. It’s not that hard. He’s a brawler who can morph into a giant gun, an anvil, and a sword among other things. You can also play him up as a little powerhouse in terms of strength. Maybe not Little Mac strong, but perhaps Captain Falcon level strong.

I will concede that Wonderful 101 didn’t sell well and Nintendo may not see much reason to put him in. But since when has sales dictated inclusion? Ness got in after all. Even if it did, sales for Wonderful 101 could only benefit from extra exposure. Besides, he had a pretty good campaign going for him before the game came out. I still think he’d be an awesome character.

In terms of third party candidates, even ones from the 8-bit era, I feel Hayabusa isn’t as popular of a choice as characters like Simon Belmont. He still is an awesome contender though. Ryu is a master of swordplay and ninja skills. In fact, Smash Bros can use another ninja since we only have two. There is a ton of possibilities for his Ninpo powers as well.

Ninja Gaiden was a big part of Nintendo’s history which is why he has a good shot. While he would stand out in Nintendo’s cleverly chosen third party mascots, Ryu still has nostalgia on his side, not to mention relevance. I have faith that Ryu would be an awesome fighter.

Bayonneta: Not sure I need to explain why she’d fit in, but she would.
Rayman: Rayman is another one of those characters who would blend in with the other third-party characters. Plus, he’s already a trophy.
Toad: A dull choice, but I feel Toad could provide an interesting style to the roster. Whether regular Toad or Captain Toad, he’ll be cool.
Simon Belmont or Solid Snake: Konami should have a character in again. These are my top choices for nostalgia (Belmont) and familiarity (Snake).
Isaac: Fans have convinced me even though I never played Golden Sun before. Besides, I find it peculiar that he isn’t even an assist trophy.

There are plenty of characters I would want for the newest Super Smash Bros games. While I’m not saying everyone here is a shoe-in for entry, these are characters I’d love to see.

How about you guys? What characters remain on your dream roster? Let me know in the comments and continue the speculation together.