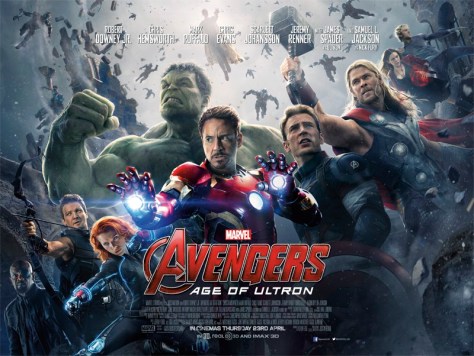 Every year, including this one, my most anticipated film is always a Marvel film. Lord knows my family and I were super pumped for Avengers 2 considering Marvel’s cinematic winning streak since 2008. We couldn’t wait for this film. We even assigned each other Marvel character T-shirts for the occasion of watching the movie opening weekend. (I wore the Ultron short). And thank God this movie turned out to be just as awesome as we wanted it. END_OF_DOCUMENT_TOKEN_TO_BE_REPLACED

This was my most anticipated film of 2015. In a year that is chock filled with highly anticipated films- from Star Wars to Jurassic World to Fast and Furious– this was the movie I had my eye on. That’s because I’m a huge fan of Marvel’s line of movies and the first Avengers film. But with great hype comes a great amount of skepticism. The first Avengers film is a hard act to follow, let alone attempt to overtake. People still say that it’s the greatest comic book film ever. And that’s the chief question this time around: Is it better than the first one? As debatable as it is to say, I would say “yes”. END_OF_DOCUMENT_TOKEN_TO_BE_REPLACED