Yesterday marked 20 years since the PlayStation 1 was released in Japan. Since then, the little gray box from the creators of the walk-man has come a long way. 20 years later and we have that PS1’s great-grandson, the PlayStation 4, on the market, as well as its portable relative, the PlayStation Vita. Sony has proven themselves as a force to be reckoned with as it now places first place in modern hardware sales.

To commemorate this occasion, Sony is releasing a limited edition PS4 console paying homage to the one that started it all.

This PS4 is colored “original gray” to match that of the PS1. On the hard plastic section of the PS4, you’ll see the PlayStation’s signature button symbols (Triangle, Square, Circle, and X) accompanied by a 2 before each circle to represent 20. On the gloss-finished section of the console, the PlayStation logo exists in its multicolored variant. This PS4 also comes with a gray stand in case you prefer an upright position for your PS4. Lastly is the DualShock 4 controller which also alludes back to the original DualShock Controller. Like the console it comes in gray, and the touch-pad has the same button patterns found on the console. 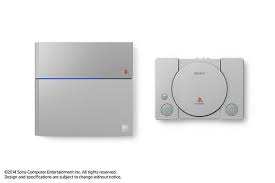 Basically, its a gray PlayStation 4. Simple but nostalgic. It’s made all the more special by how limited edition it will be. Only 12,300 of these gray boxes will be made. These no doubt will be highly collectible and valuable in the future. It is currently available for pre-order and costs $500 in North America. Official details of exactly when we’ll see these released will be announced during the PlayStation Experience event on December 6.

Normally, I wouldn’t comment much on these kinds of things, because special edition consoles is nothing new. Eventually, you’ll start to see every console in every color imaginable. I have also always been of the ideology that the original, default design of any console is the definitive and preferred version of a console. I was even offered a Destiny edition (white) PS4 when I bought the system and said no. Color palettes have always been frivolous to me.

I now denounce that ideology. I finally understand. I want this gray PS4 in my house NOW!

Maybe it’s purely sentimental and nostalgia-based. (After all, my first game console was the PS1). We’ve all been suckers to nostalgia before, so that’s probably my reasoning. Nonetheless, I can’t get over how much I love this design. Almost everything to the ‘T’ is perfect. I know all they did was make the dang thing gray and throw some symbols on there, but who cares.

Tell me I’m not the only one who’s all over this thing. This is the first time I’m looking at a console I own and wishing I waited a little longer. Granted, I probably wouldn’t have bought it even with its rarity because $500 is a little too high for just a color change. I’m a cheapskate and that’s how I roll. But had I the ability and the timing, I would’ve pre-ordered the thing already.

I’m really glad that Sony made this decision, but I do have one little gripe: the price.

Rare or not, you should at least put a couple PSone classics downloads in there for that price. Had I been in charge, I’d make it interesting by placing a different download voucher for a different game in each box. You know what I mean? Like 100 of them include Crash Bandicoot, another hundred have Spyro, another 100 have Resident Evil, and so on. At least give us something more than just a gray box to encourage that extra $100. It wouldn’t kill you since each PSone classic costs between $6 and $10.

Other than that, what’s not to like? This was a great way to celebrate 20 strong years of the PlayStation brand. I would understand if you feel differently than I do. There’s that part of me that’s saying this isn’t that big a deal. However, for what it’s worth, I think it looks beautiful. I feel jealous of the person who gets their hands on that box.

As for Sony, thank you for the life-time of fun you’ve given me… Now, tell Naughty Dog to make a new Crash Bandicoot game already!

What are you guys’ thoughts on this limited edition PS4? Would you/will you buy it if you can? What are some fond memories you have with PlayStation throughout the years? Lastly, would you buy an anniversary console for Wii U and Xbox One? I honestly would love to see a NES looking Wii U or a Xbox One with that big green X on the top. Let me know in the comments so we can start a discussion.