Let me start by saying I’m sorry. I do realize the gravity of what I’ve just done. I know that by seeing this in the theater (on opening day) I’m directly contributing to the problem these movies cause — a problem I promised myself to try and extinguish by simply staying home. All I had to do was just wait 2 measly weeks for Spider-Man, but no. I caved and saw this movie anyway, knowing it was a terrible idea. In my defense, T-Mobile made me do it. They offered tickets to the movie at just $4 and we were just so bored that day… more like weak.

I gave this movie my money and I’ll have to live with that now. The question now is should you do the same?

Transformers: The Last Knight is the fifth installment in the Michael Bay directed film series based on the popular Hasbro toy-line and cartoon of the same name.

Following the events of Age of Extinction, Optimus Prime has left Earth in pursuit of the Cybertronian creator, Qunitessa. Originally planning on killing her, Optimus ends up turning into the evil Nemesis Prime and is manipulated into enacting her evil plan of destroying Unicron (aka Earth). For only though the destruction of Unicron can the fallen planet of Cybertron be revived. However, legend tells of a group of heroes, or knights, who would protect the world from such an apocalyptic event. With the help of Cade Yeager, the Autobots set out to unite the knights, save the planet, and bore the audience.

For those who have seen a Transformers movie before (which, let’s face it, means all of you), you know what to expect in terms of story and writing. It’s a generic, dumb narrative with juvenile humor, shallow characters, and unnecessary subplots that barely connect in the end. There’s really not much else to say passed that, but you may be wondering if things are any better now than in the previous films. While I’m tempted to just answering no, I will be fair and mention a couple of the improvements.

I do appreciate this film’s attempt at trying to relegate some of the unnecessary side-characters to the background, allowing us to just focus on Mark Wahlberg’s character. Sure, it still doesn’t negate the fact that this movie still has unnecessary characters, but at least you see a lot less of those pointless characters this time around.

I also found myself kinda enjoying the Optimus storyline. In fact, I would’ve liked this movie much better if it was just about Optimus Prime turning against the humans and fighting the Autobots. Those were the best parts of the movie for me. The problem is that those scenes take up less than 20 minutes of this film’s obnoxious 2.5 hour runtime. Yes, I’m serious. Don’t let the trailers or the poster fool you. Optimus is barely in the fucking movie at all.

This last high point I can only discuss by getting into one of the movie’s big negatives: the story progression. The first act of this film is awful. It’s uneventful, uninteresting, filled with a ton of unnecessary subplots, and padded to oblivion with needless filler. I was miserable the first half-hour of this movie, but thankfully the film started picking up a bit for act 2. This is when things started to become more focused and delved into the central lore of the knights, which was somewhat fascinating. Though, it wasn’t until the action-packed final act where I started actually having fun in the theater. I find this final battle better than previous films all things considered. It wasn’t great and lasted way too long, but it wasn’t too boring.

From there everything else is the same, tired, copy-and-paste film we’ve been seeing from this series for the passed 10 years now. 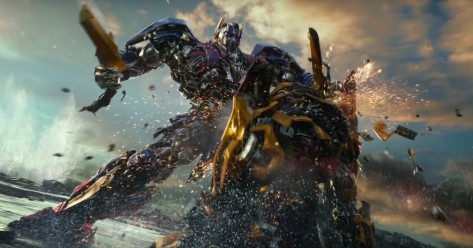 As usual, the film is a visual marvel in terms of effects. Almost every bit of CG blends seamlessly with the real-life environments, and the Transformers still look stunning as always. The design of these characters haven’t changed too much, and at times it’s kinda hard to tell one Transformer from another, but at least you don’t have too many Autobots to keep track of this time around; so it isn’t too big an issue. Additionally, the few times the film goes to space looks fantastic to say the least. I mean, they made Cybertron look good.

As for the action scenes, they look nice as a result of those effects. However, many will find, like me, that most of the film’s many action sequences are fairly uninteresting. I personally found my mind wandering during some of the big battle scenes, which is horrible to say about any action movie. And you know, I could never really understand why that is. Is it that I really don’t care about these characters? Is it the editing? Is it the choreography? What is it about these movies that make giant fighting robots boring as shit? It is a question that’ll haunt me for the rest of my days.

As I said earlier, there are a lot of unnecessary side-characters, which unfortunately makes discussing some of their performances somewhat pointless. Therefore, to save us all time and energy, let’s just very briefly run through some of the bigger roles of the movie.

Now, the 3 most likable characters in this movie include Cade Yeager (Mark Wahlberg), Optimus Prime (Peter Cullen), and Sir Edmund Burton (Anthony Hopkins). Cullen continues to be the single consistently enjoyable thing across the entire series, and I can’t fathom why these movies are about the random human characters and not him. No offense to Marky Mark at all, because he’s a great leading man, but his performance is hindered by the fact that his character isn’t that interesting. In fact, the character’s even less interesting now than he was last time. The same can be kinda said about Anthony Hopkins’ character. However, because both Hopkins and Wahlberg are talented, charismatic actors, they’re able to get a lot out of those characters than intended.

Other slightly interesting characters include Bumblebee (of course), Viviane (Laura Haddock), and Cogman (Jim Carter). Bumblebee’s arc is honestly one of the best in the whole movie. Not that it lasts long or anything, but they actually gave him something subtle to work with in the film that comes back at just the right time. Haddock is noteworthy as the first time a female main character is actually handled well. She may not be totally interesting, but she’s much less the one-dimensional eye-candy than her predecessors for sure. I have to give them credit for that one. Finally, Cogman was probably the only slightly funny Transformer in the movie, as well as the most charming. His whole personality sticks out compared to the others, and his line delivery hits a bit better as a result.

And, honestly those are the only characters worth mentioning. There’s also a little girl who does nothing, some military guys who are totally forgettable, a tech-savvy comic relief character who kinda made me laugh once or twice, and a bunch of other Transformers who left no impression on me at all, including Megatron. In fact, I think Megatron was only on screen for 7 minutes. Why is he here? Why are any of these characters here?

I’d like to call attention to just one more thing before we wrap things up; something I’ve never had to bring up in any of my reviews before and will probably never bring up again: the aspect ratio.

For those who don’t know, a movie’s aspect ratio refers to how much of the screen you see. Depending on the camera you use, the setting you place on your TV, or sometimes the copy you purchase for the film, this may vary. With that in mind, it’s important when making you action movie to keep as consistent with this as possible, and only change it in a way that is both seamless and stylistically appropriate.

Otherwise, you’ll end up being with a film like Transformers 5 that clearly used different camera-types to film every scene, shamelessly and lazily weaving those together and calling it a day. It’s distracting, annoying, and completely takes the audience out of the movie only to wonder if the projector is acting up. Perhaps not everyone will notice this flaw, but I did. And, no, I wasn’t specifically seeking that problem out. It was pretty damn noticeable.

I hate reviewing movies I end up not liking, because I try almost every time to approach a film with hope and a positive attitude. I’ve borne smiles for Transformers 3 and 4, but now I’m just tired. I’m so tired of hoping these movies will be good and giving these movies a chance. At this point, it’s fairly clear that the only good Transformers movie is the first one, and maybe the second one. While it seems to have tried some new things in order to rise above 3 and 4, it only made it slightly more tolerable. In the end, Transformers: The Last Knight is nothing more than a dull, long, derivative affair without heart or soul. Terrible, no, but certainly not worth your time.

Despite what I think of the film, I do acknowledge that the Transformers series still has its share of dedicated fans. I’ve seen that first hand. So, if you have enjoyed all the movies up to this point (not just the first one), you are more than likely going to like this one just as much. I’d be shocked otherwise.

However, for just about every other person out there, whether you’re a fan of the cartoon or are just bored and itching to see a movie, don’t see it. Or at least don’t see it in theaters. Wait for it to come on TV or Netflix, and then maybe give it a go. If you must see an action film this weekend, watch Guardians or Wonder Woman instead, or just wait for Spider-Man like a normal person. Please, just don’t waste your time with this if you don’t absolutely have to, especially when the first Transformers is almost always on TV.