Before I get started, let me forewarn you that I’m fresh off watching the conference as I write this. Which may turn out to be a bad thing as I left the conference a little salty. We’ll get to that soon, though.

Welcome back to those who are joining me from my previous post about the Microsoft conference. For those joining me for the first time, I’m dedicating this whole week to the gaming superbowl that is E3 as I cover the big 3 conferences: Microsoft, Sony, and Nintendo. I will also be covering individual announcements from other conferences later in the week, but for right now it’s time to talk about Sony’s E3 conference.

I’ll basically go through the events of the press conference in chronological, giving my brief thoughts on each as I go. This post unfortunately won’t cover everything (at least not in depth). Just the highlights of the show and what stuck out to me. At the end, I’ll talk a little bit about the conference as a whole.

The Sounds of Silence 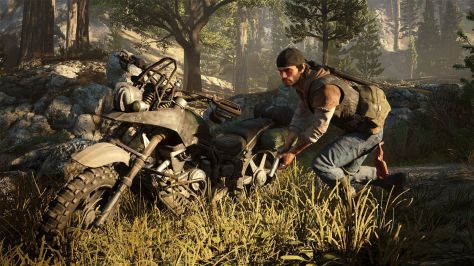 As the conference starts and after a mood-setting Middle Eastern tune plays, my eyes were instantly stimulated with excitement for Uncharted: The Lost Legacy. Just my eyes, though. Not my nose, mouth, hands, and certainly not my ears. Technical issues messed with the audio for quite some time, so I had to see the trailer again after the show, which was admittedly worth it.

I am a huge Uncharted fan and an even bigger fan of last year’s Uncharted 4, so this was a fantastic start for me. Sure, it may have been an entirely cinematic trailer, but this is one of the few instances where that’s totally okay. Not only did we already get gameplay footage at PSX, but the game’s only 2 months away. This is perfectly reasonable for a final tease before the game, and I can’t wait!

The game was followed by none other than Horizon: Zero Dawn, which will be getting a story expansion sometime this year called The Frozen Wilds. It looked pretty cool honestly, though I must admit I’ve yet to get my hands on the game yet. I definitely still plan to soon, so it’s good to know that there will probably be more to do in the game by the time I get it.

It should be noted that by the time the third game trailer was being shown, the audio was still messed up. However, that finally changed by the time Days Gone started to get interesting. The game was previously announced at last year’s E3, but now we’ve got our first look at the gameplay, and there’s a whole lot of yes in it. The mere fact that a game with zombie bears and wolves in it exists is a miracle of game design in itself. Add in creative combat, motorcycles, bear traps, and the ability to sick zombies onto your foes is simply icing on the cake. It definitely gave me a Last of Us vibe with just a bit of Infamous in it. I never thought I’d say I’m excited for a game from the developers of Bubsy 3D, but I am.

While the world got busy scheduling their emergency otology appointments, Shawn Laden came to thank the audience for coming. Then he leaves, never to be seen again… until the very end of the conference. Again, we’ll get there.

So far we’ve seen a spinoff, an expansion, and gameplay for a game we already knew about, so now it’s time for a few surprises, starting with Monster Hunter World. I can’t accurately tell you how different it is from the main series games, but what I can tell you is that there are fire-breathing T-Rexes with expandable noses, velociraptors with hairy arms, and a fire-breathing pterodactyl that takes the T-Rex out. Best of all, you get to take them all out with a giant sword! Shall I go on? I didn’t think so!

Perhaps the biggest surprise of E3 was that a full remake to one of the PS2’s most beloved classics, Shadow of Colossus, is not only getting a new game. This is a full, from the ground up remake of the game. The trailer itself was great for a first trailer, showing brief glimpses of the gameplay (no cutscenes) and a good look at the game’s creatures with just a small taste of the action and platforming that’ll accompany it. Despite not playing the original game before, I’m can’t wait to see more from this game. I mean, had I known this was what I was missing out on all these, I would’ve hunted this game down so much earlier. In fact, I need this game in my life immediately!

Marvel vs. Capcom Infinite was also shown at the show with a look at the game’s story mode. I honestly didn’t know there was going to be a story mode in the game, but I definitely support it. I get Capcom gameplay and characters with a Marvel-esque crossover story about the Infinity Gems? Yes, please!

Skipping Call of Duty: World at War II, the conference then moved onto PlayStation VR games. (I totally forgot that PSVR was a thing beforehand, so this was a bit surprising). This included Skyrim VR, which is cool I guess. Nothing much to say there. Same can be said for Final Fantasy XV: Monsters of the Deep, which was necessary for some reason. Totally beats a trailer for FF VII remake, though. Am I right? Who needs limit breaks when you’ve got livewell?

Star Child is a VR sidescroller with a really cool color scheme and art style to it. Looks kinda interesting. Moss is also a very stylish game for VR, and has an adorable mouse as your protagonist, but there’s not much in terms of gameplay here.

There was also a new IP called The Inpatient which is my favorite VR trailer of the show. This appears to be a horror game where you play as a patient in an insane asylum, and it looks like some creepy shit goes down while you are there. Not a lot of gameplay yet, but the atmosphere and setting should make for a great time.

The new God of War was also there with some additional gameplay and a bunch of story details. I’ve only dabbled in the series before, but I’m really liking the way this game is looking so far. Like Days Gone, it seems to be taking slight inspiration from The Last of Us, only this time in terms of story. The gameplay still seems very much God of War, but the father/son dynamic will make this a very interesting game to go through next year. It also looks like you can play as the son at certain points, too, which will definitely mix things up and make the story much more meaningful.

Quantic Dream’s newest cinematic, choose-your-own-path game is called Detroit: Become Human, and will play just about as you’d expect if you’ve ever played any other Quantic Dream game. The concept is interesting this time around, as you play an android in the midst of an uprising against their human masters. Depending on your path you can take a peaceful or violent route, which appears to be a very thin line in this game. Not bad, all-in-all.

Destiny 2 also got a trailer, but I don’t play Destiny, so next! 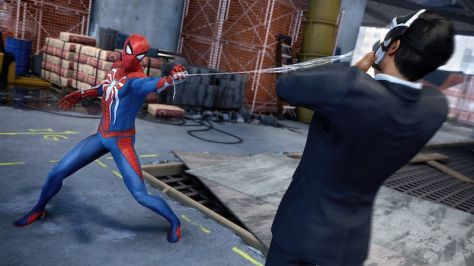 Shawn Laden reemerges for a final time to usher in the company’s final announcement. If you were me at this point, you were probably looking at your clock in denial that this seems a bit abrupt. Yet, we beat on in hopes that they’re just trolling.

The grand finale was Insomniac’s Spider-Man game, which was one of the games I most wanted to see. Thankfully, every last bit of it was rolling gameplay footage… in fact this was one of just two games that did that. No matter, though, because if I was hyped for my favorite heroes upcoming game before, I was about to be blown away! Everything I wanted and more was all here and more. Yes, granted it seems to be taking heavy influence from the Batman Arkham series, but that’s about what I expected anyway. Or at least that’s what I kinda hoped for, because Batman Arkham is great.

I’m definitely enjoying the combat system, which unlike Arkham utilizes more grabs and acrobatics. I like how you have multiple web-base takedowns at your disposal. Web-slinging through the city looks like tons of fun as well as easy to handle. Wilson Fisk is also in the game, which gives me a lot of hope for a mention and/or cameo from Daredevil. Plus, the game teases none other than Miles Morales towards the very end of the conference. Which is a fantastic idea, especially if he’s playable. Ahh! Just so much Spidey goodness here, I can’t contain it!

And with that, the conference is… over… 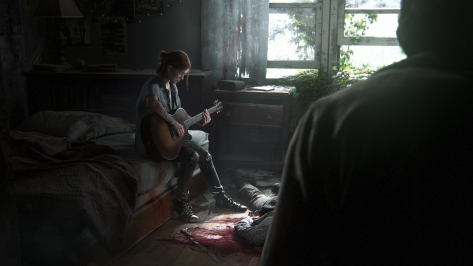 Before I go on a mini-rant, I’d like to make one thing clear. This conference was not bad. As you can see I enjoyed what I saw, which means there is a ton of value in this show. However, I am saying that this conference was far from the A effort we’ve come to expect from Sony the passed few E3’s. Compared to those, this conference was too short with too few surprises.

Now, to be fair, Sony did have a few more announcements for E3, such as Knack 2 and Superhot, and Undertale, which were surprises; but they were shown during the pre-show, and therefore most gamers will miss and already are missing them. Had those been during the actual show, I’d probably be singing a different tune here, but they weren’t. Combine that with a mere 16 games total at the show (which I know I sound spoiled, but compare that to Microsoft), all but a handful being known and only 2 coming across as major surprises, and what’s left is somewhat underwhelming.

There seems to be a sense that you’re intentionally holding back for other conferences, which I can understand. E3 isn’t the only show in town with PAX, Gamescom, Tokyo Game Show, and your very own PSX following this, but if that was the case, I wish there was some form of warning to fans beforehand. I’m not saying come out and say you’re E3 won’t be too big this year. Just something as simple as “Our conference will be only an hour long” or “Don’t expect x game to be announced” would’ve gotten some form of message across; especially if you coupled that with “Tune in for PSX this December”.

As it is, the two biggest exclusions from the show include Death Stranding, FFVII remake, Shenmue III, and most of all The Last of Us: Part II. That last one really broke my heart, because that was my, and countless others’, most anticipated game of E3. I think you could’ve replaced that FFXV fishing game with any of the above games and make this show instantly better.

Again, it’s still not a terrible conference by any means. My favorite game of the show was, of course Spider-Man followed by Days Gone. I simply wish it was better, or that they’d admit to it being a smaller conference than usual beforehand. There’s no problem with being a smaller showing, either. Lord knows, Nintendo was the king of those before the Switch. To end things on a brighter note, though, at least Sony had emphasis on gameplay this year, and that’s always a good thing.

What did you guys think of Sony’s E3 conference this year? What’s you favorite game at E3 so far? Let me know in the comments so we can nerd out together. And stay tuned for my coverage of Nintendo’s Spotlight event as well more from all of E3!