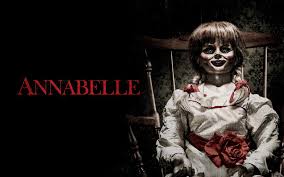 Ironically, we follow a movie about a boy who visits heaven with a movie about a possessed doll who steals souls. And both of these movies are based on true stories. Maybe this says something disturbing about me. Or it may just be my likelihood to watch either film again. Anyway, let’s discuss this one.

Annabelle is a prequel to the Conjuring. (I never saw the Conjuring). In the 1970s, a couple lives a simple life until their cultist neighbors attempt to kill them and their unborn baby. Before police kill the neighbors, one of them bleeds on a porcelain doll they happen to own. Ever since then the wife experiences paranormal and unusual behavior. Eventually she gives birth to the child. It appears that whatever spirit exists in the house is taking an interest in the baby. So it’s up to her to get to the bottom of this and save her child.

This movie is a little bit of a milestone for me personally. It’s my first horror movie to be seen in the theater. To some that sounds like a weak start, but I actually found the movie decent. Probably not horrifying, but not terrible either.

Horror movies in recent years have received a lot of criticism for relying too heavily on jump scares, creating uninteresting, stupid characters, and having very weak writing. Annabelle may have some of those things going for it as well, but I would say that it’s rather light on all of those elements. The writing is sort of predictable in places, but has a decent flow and payoff to it. The best way to describe the writing is “formulaic” or “paint-by-numbers”.

Now what does that mean for the scares? There are one or two really good scares in the movie. There was one scene in the middle where I actually screamed. I’m not joking. I screamed in the theater at one point. So, it’s not that the film is all jump scares and cheap jolts. Don’t get me wrong, they do exist, and they are probably more numerous than the genuine scares; but, you’ll be surprised at what this movie is capable of. That’s helped by the movie’s ability to effectively build suspense.

I realize I called the writing formulaic, but that doesn’t make it bad. The general story never bored or lost me, and the characters were memorable enough to describe. I can’t name any of the characters aside from Annabelle, but I can at least recall persaonalities and faces. The effects look great as per usual for a AAA production. I particularly admired the make-up of the creepy little girl. Cinematography, acting, and score were also well-done.

I know many people who hated the movie and many people who liked it. It was definitely the movie to see in October last year. I would say the movie is most ideal as a rental for a late night get-together with friends or a sleepover. Horror film purist would most likely hate the movie, but any casual moviegoer wouldn’t have too much of a problem with the film. Won’t win any awards, but it’s a fun little watch.

Before I go, as a little bonus I wish to share a quote with you:

Fellman told The Washington Post that the studio was considering a franchise based on the film. A sequel is currently in the works and cast is unknown.[48]Don Mancini wants to make Chucky and Annabelle work together in the near future.

Well, this went south fast. The idea of an Annabelle sequel isn’t too thrilling to me to begin with, but a crossover with Chucky? I’m not digging it.