Well, it’s been a while since I made a legitimate post on here. Outside the 2 updates and the movie countdown, I’ve been a quiet one. Half a month has passed, so now’s a better time than any to get officially back to normal for the New Year. Nintendo Direct’s are always a fun thing to discuss.

I was pretty excited for this honestly. My main motivation and hope was that they’d be talking about Mewtwo in Smash Bros. Unfortunately, no such thing occurred. Ah well, there’s always next time.

The clear star of the show here was the “New” Nintendo 3DS. Amiibo also got a good showing  as well as Fire Emblem (which is a good change of pace). A decent wealth of information to work with. So let’s actually get to it, shall we?

I’ll get to the elephant in the room first: the New Nintendo 3DS. I remember back when the New 3DS was announced (which I will now abbreviate as N-3DS) I had a complicated set of emotions. First I was excited, then I was a bit pissed, and later I calmed down. I now accept the idea of N-3DS. The main reason why is because Nintendo does this kind of thing since then GameBoy (maybe even the Game & Watch).

Referring back to the Nintendo Direct, what I see so far looks good. CPU and processing power are admittedly promising. You can’t knock the hardware. The C-Stick does bother me a bit because that thing looks uncomfortable. Then again, I learned a long time ago to never doubt Nintendo when it comes to controllers. Everyone thought the Wii U GamePad would be too bulky until they used it.

Amiibo functionality is another nice addition for Smash Bros and that Codename S.T.E.A.M game. And as someone who actually likes to use the 3D effect now and then, I’m glad Nintendo is improving their screen.

So, yes! You can say I made peace with the idea of N-3DS. Sure I won’t be picking one up anytime soon, because I got my 3DS a little over a year ago, but I do support it. Maybe if I have come across some money, I wouldn’t mind picking this up. Besides, that’s the only way to do multiplayer.

Love them or hate them, Amiibo doesn’t seem to be going anywhere. So keep scrambling around for these little things while you can.

We got a more narrowed release window for Wave 3. They grace the world in February. Good luck finding Shulk, Megaman, or Sonic ever. Wave 4 was announced and dated for Spring of this year. Among them are Wario, Ness, Pac-Man, Robin, Lucina, and Charizard. That’ll be an interesting bunch to find let me tell you.

Don’t think they’re stopping at Super Smash Bros, though. There are even more Amiibo coming our way with Mario Party 10. There will be redesigned versions of Mario, Luigi, Peach, Yoshi, and Bowser. Mario Party 10 will also support Super Smash Bros versions of Amiibo. In fact, the current Donkey Kong, Rosalina & Luma, and Wario Amiibo will also be supported. There will also be one totally new Amiibo character: Toad. The Amiibo collecting game just got a lot more complicated.

Additionally, Amiibo support was detailed for several Wii U and 3DS games, including Kirby and the Rainbow Curse, Codename S.T.E.A.M., and Captain Toad: Treasure Hunter. They unlike special gameplay features, the most notable being Codename S.T.E.A.M.’s use of Marth and Ike. By the way, the notoriously rare Marth will be resupplied.

That’s a lot of Amiibo news! Where do I start?

Well allow me to say I am a fan of Amiibo so far. To me it’s mostly for decoration-sake with the in-game features being a bonus. Somehow, these things are suppressing my cheapskate tendencies. I highly doubt I’ll be the one to buy every last one of them, nor would I spend surplus price for rare Amiibo; however, I do intend on buying a couple more while this is around.

The ones from Wave 4 that are catching my eye are Pac-Man and Ness. These two are my Smash Bros mains. I especially want Pac-Man because I know for a fact how hard he’ll be to find. Speaking of which, I feel bad for the people who spent so much on Marth on eBay before now. They must be the saltiest consumers alive right now. I think Mario Party 10’s redesigns may cause the original designs to somehow become rarer, but that remains to be seen.

From a gameplay perspective, I think these are being well-utilized for the most part. Codename S.T.E.A.M. is especially interesting in how they use Amiibo. It’s not just a costume or an ability; it’s a whole other character. 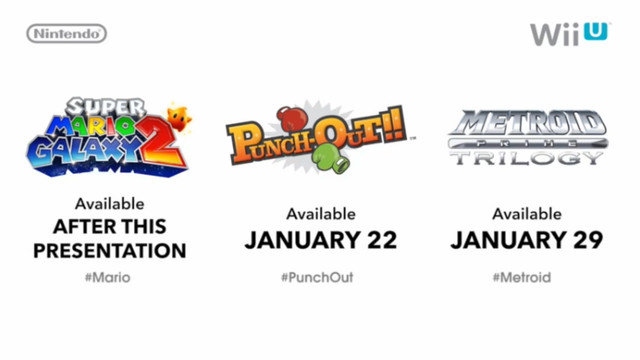 So far the 3 announced games are Super Mario Galaxy 2, Punch Out, and Metroid Prime Trilogy (which I guess makes that 5 games technically). Not a bad start if you ask me. Each week there will be a new Wii download available, starting the night of the Direct with Super Mario Galaxy 2.

I’m proud of Nintendo for offering Wii games for download. Hopefully they put up only the good Wii games, and that Xenoblade Chronicles will soon be one of them. Personally that’s the one I would download no questions asked. Dying to try it out.

Those were the big announcements of the Direct. So I’ll just skim through the rest and let you know what I think.

The Direct started with a new, unnamed Fire Emblem title for 3DS. Good to see what used to be the little known series that appeared in Melee is now getting big here in America. In terms of Nintendo, this year could be the golden year for Fire Emblem between this and Codename S.T.E.A.M.

Xenoblade Chronicles X was shown off with gameplay for the first time. As I said before, I’m very interested in trying the Xeboblade series. From what I’m seeing so far, it looks like my kind of game. Maybe when I see some combat in the gameplay footage, I’ll be 100% percent sold.

Puzzle & Dragons, an RPG puzzler from Japan, is coming west this year with a two for one bundles. You can get both Puzzle & Dragons Z and Puzzle & Dragons: Super Mario Edition in the same package. I’d be lying if I said I wasn’t interested. Such a unique and cool concept. There’s also a free-to-play Pokemon version of this for those interested.

Monster Hunter 4 Ultimate was also shown off with gameplay footage. The release date was also set for February 13, the same time as the N-3DS. I still have a copy of Monster Hunter 3 Ultimate for Wii U is have only gotten an hour into. So I’ll wait on this one until I’m done with the previous one.

Hyrule Warriors will receive 2 new DLC characters: Young Link and Tingle. They look like fun to play, especially Tingle with his money bags and balloons.

The last thing I’ll mention is Mario vs. Donkey Kong on Wii U and 3DS will be a cross-buy game. A smart move, though I see people buying the 3DS version in order to get the Wii U version for cheaper. Only time will tell though.

And that’s everying I have to say about this Nintendo Direct. I know I missed some things, but this was my piece for the most part. Overall, I think this was an informative showing by Nintendo. There’s a lot to take in and to buzz about. So, let me know in the comments what you think of what was shown during the Direct. I always love hearing what you all have to say, so sound off at will!