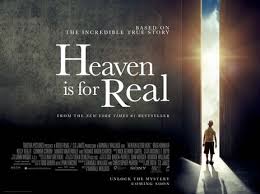 Here is another religious film for the countdown. I was extremely interested in this movie when it came out. As a person of the Christian, the concept kind of grabbed me. It at the very least was a film to turn heads when the trailers were rolling for the film. I ended up seeing the movie on DVD in the summer and was genuinely pleased with what I got.

Heaven is for Real is based on the book by the same name and inspired by a true story from the perspective of Todd Burpo. Todd is the pastor of a church in Nebraska. Among a time of already escalating financial and medical difficulties, his son Colton is rushed to the ER with a high fever. During emergency surgery, Colton was dead for a brief period of time before resuscitated. After a full recovery, Colton describes to his father his near-death experience where he visited heaven. The result of such a revelation causes controversy among the parish community, media coverage from radio stations, and an inner-conflict within Todd on whether to believe his son’s incredible, yet polarizing story.

Now in terms of a story, it’s based on real events and real individuals. This makes the film’s story hard to judge. However, I can comment on the writing which is well-done. Dialogue scenes are very natural with characters that I will assume are accurate depictions of the Burpo family and friends. You could argue that the narrative structure can be seen as a little loose and uneventful, but that’s just because the story doesn’t beg for a climax. If anything, the climax is toward the beginning of the movie. Consider that the story is more about the experiences of Colton Burpo than anything else, and you can cut the movie some slack.

Furthermore, the film is well-acted, well-shot, well-edited, and well… just everything about the film is standard for its mid-level budget and modest scale. The acting in particular may be one of the film’s most appealing features outside its plot. Again, I can’t comment on source loyalty, but the actors do a great job of making you invested in the characters.

It is very clear to everyone that if you’re seeing this movie it’s because you’re fascinated by the subject in question. And to that end, does the film deliver an interesting depiction of heaven?

I’d say the film does a great job delivering on what it advertises. Keep in mind that, despite my Catholic background, I went into the film with a hopeful yet open-minded perspective. I was willing to call the film out if it was depicting an overly romanticized set of ideas. (Pertaining to the movie alone and not the actual Burpo story it’s based on). The film thankfully offered ideas that manage to be effective and believable while not flying too close to the sun. An unskilled filmmaker would go over-the-top with such ideas (for example, if Jesus appeared in the characters’ dreams), but here they’re presented in just the right manner.

I would gladly recommend seeing the movie if the concept catches your interest. You don’t have to be religious to like this movie, but I see Christians appreciating the film most. I don’t see myself rushing to see the film again anytime soon, but it’s never out of the question. Maybe it’s a good Easter time rental.

Had I based the list on quality, this film would fair a bit higher, but for my purposes and likelihood of watching it again, it is where it is.